Six kings from here and there, of everything and nothing, have taken to the highways and byways to each complete their quest: exile,discovery, an invitation, a rendezvous of love, a market, a congress, a crusade… Or perhaps simply following an intuitive initiative. They are accompanied by their people, buffoons, carriers and other chiefs of protocol constituting, with the Courts Musicians, miniature ambulating kingdoms. Honouring their vow to laziness, each being drawn by his respective mode of transport (be it a tracked throne, a frigate floating on a human tide, a chariot or a sledge…) the length of an initiating pathway.
Large scale street theatre at the crossroads of popular traditions and the imagination, The Lazy Kings is composed from three spectacular pathways penetrating the city segment by segment. These three parades symbolise the South, North and East. In each parade there are two royal corteges. Simultaneously, throughout the urban periphery, the ingenious corteges trace an ephemeral, lit pathway, leading the public across the main arteries of the city and rejoining
for the aerial finale around the Tree of Kings, reuniting the spectators in the ultimo climax of this urban peregrination. 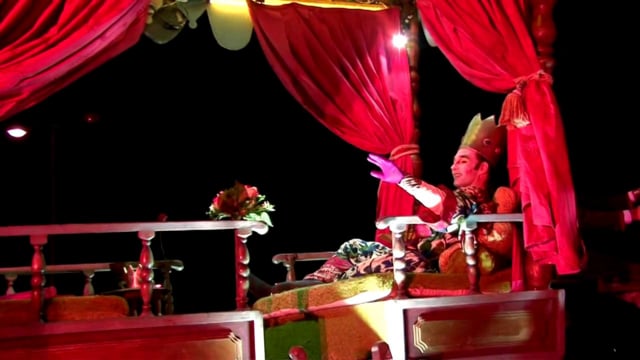