Ever since its beginnings, Full Tilt has produced numerous performances that have left deep and lasting traces in the history of British contemporary circus. Co-founded by Rowan Fae and Dela Seward Full Tilt has a long history of fruitful cooperation and has conducted a broad range of projects throughout the years. Ladies of creative talent, Rowan and Dela first collaborated as co-directors on Bristol’s large-scale cult events Carnyville directing the courtyard finale performances involving the entire 200 cast members in 2007/8/9. The company co-produced, directed, and performed Arcadia Spectacular’s first immersive 360° performance on the famous ‘Spider’ at Glastonbury Festival In 2009 and 2010, choreographed TPI Award Winning Arcadia, Landing Show, in 2014, and assistant directed Arcadia’s Metamorphosis show in 2015.

In 2014 Full Tilt worked with internationally acclaimed Turkish contemporary dance producing house Ciplak Ayaklar to create a specific vertical dance performance On Air for the International Scenography Biennale in Stuttgart, curated by Artellier Brukner. In 2016 the company facilitated and designed the use of a complex zipline system for Athletes of the Night an immersive outdoor performance at Boomtown Festival by Bassline Circus. In 2017 between starting work on Substratum, directors were also busy designing the show Celluloid Sail for Compass Presents, an interactive circus, theatre, and cinema production touring the UK and Ireland on The Kaskelot – one of the largest wooden tall ships in commission. In 2018, the company oversaw the artistic direction for Canopy of Stars, a promenade performance by Whispering Woodfolk staged on the grounds and woodlands of country estates.

Full Tilt is founded on over 30 years of combined experience of director/choreographers Rowan Fae & Dela Seward. Rowan spent ten years as an aerial choreographer for touring productions on a Canadian tall ship with Caravan Stage Company, productions toured internationally through Europe, North America, and Canada and included; Vanishing Currents, Red Tides, Command Performance, and Utopian Floes. While Dela has been acting as a choreographer for the Invisible Circus for an equal stint facilitating many projects including British Eccentricity by Crying out Loud at Cirque Jules Verne in Amiens, France, 2014. The directors bring a wealth of experience creating work in challenging settings, e.g. immersive, outdoor, festival, and in found and re-appropriating public spaces.

Full Tilt’s core aim is to nurture the intersection between circus, dance, and theatre. Focus is placed on collaborative interdisciplinary projects with a special interest in the use of technology in live performance. We believe that in order to create emotionally impactful
experiences for audiences within the shifting digital landscape of 21C culture – makers must harness the power of new technologies within their work. Our work seeks to navigate the limitations of digital realms in regards to the direct sensual involvement of the interactive participant. The ambition is towards the creation of impactful, immersive and transformative, and inclusive experiences for audiences.

Full Tilt is a 100% female-led organisation that supports the promotion and empowerment of women in technology and leadership roles. 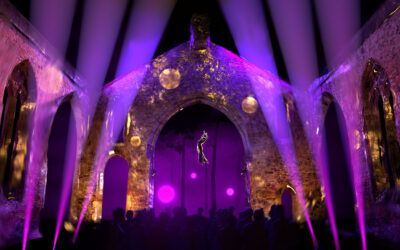 Within Without is a site-specific and immersive multimedia performance that transforms Trinity Church into a cathedral of light, texture, and movement. Developed… 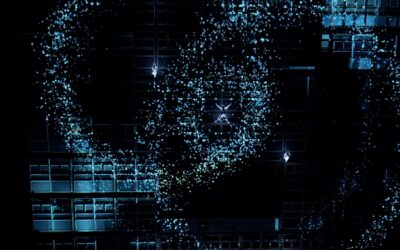 Substratum is a spectacular fusion of digital arts and vertical dance and is set to an original contemporary score. Local architecture is…